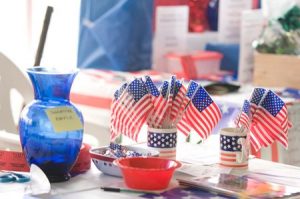 In Maine, a Patriots’ Day Weekend Celebration featuring music, reenactments, historic hunts and more is held each year in Ogunquit. The Meadowmere Resort in Ogunquit has a weekend getaway package for Patriots’ Day that makes it easy to enjoy all the festivities.”

When is Patriots’ Day? This uniquely New England holiday, traditionally celebrated only in the states of Massachusetts and Maine, is always on the third Monday in April.

Why do some states celebrate Patriots’ Day? Remember the “Shot Heard ‘Round the World” from American history class? The phrase penned by Ralph Waldo Emerson was inspired by the first armed engagement between British soldiers and colonial militiamen at the Battles of Lexington and Concord in Massachusetts on April 19, 1775. Patriots’ Day commemorates this opening engagement in the American Revolution, which bolstered colonists’ confidence in their ability to fight for and win freedom from British rule.

Initially, Patriots’ Day was celebrated each year on April 19: the anniversary of this pivotal event in American history. In 1969, however, the celebration of Patriots’ Day was changed to the third Monday of April: New Englanders love their three-day weekends!

You can read the full article on ‘When is Patriot’s Day’ and plan your getaway with our Patriot’s Day Getaway to Maine.